Of Wine, Mystery and Local Life

I’m a sucker for any novel full of atmosphere, history and a fully realized sense of place — great terroir, as a wine writer might be expected to put it. All the better if the characters love food and wine and if meals can be savored vicariously right off the page. 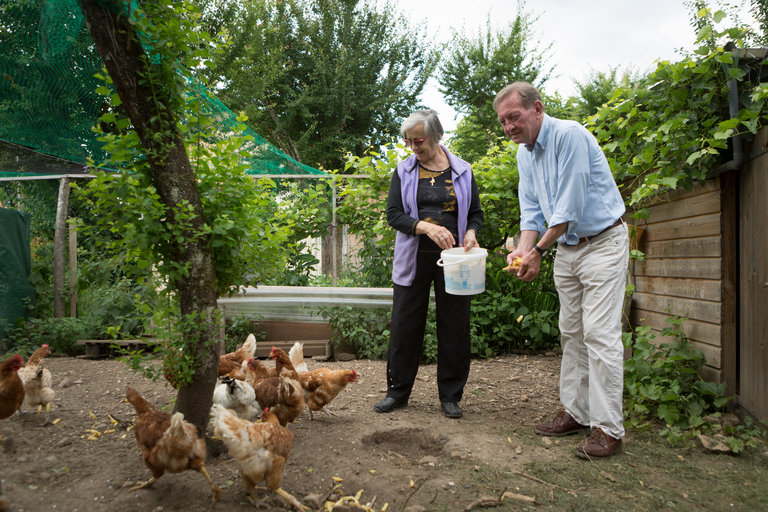 The author Martin Walker and his neighbor Francette Bogros in June, feeding the chickens at his home in Le Bugue, France. Credit Rebecca Marshall for The New York Times

In this particular category, my favorite places include the shadowy gloom of Alan Furst’s prewar Europe; the madcap fictional Sicilian seaport of Vigàta, where Andrea Camilleri’s Inspector Montalbano demands silence during meals so he can focus on his food; and especially the Périgord region of southwestern France, where Martin Walker’s Bruno Courrèges, chief of police in a town with no other police officers, guards fictional St.-Denis against bad guys and bureaucrats and finds the sense of community for which he’s always longed.

While Bruno takes on the usual array of criminals and wrongdoers peculiar to this part of France — e.g., black truffle fraudsters — much of his energy goes toward eating and drinking well, both for personal and professional reasons. My latest column explores the culinary identity of the Périgord through Bruno’s eyes.

“Food, Bruno believed, was a village policeman’s secret weapon. The more people who came to eat at his table, the more he heard and learned,” Mr. Walker wrote in his latest Bruno novel, “The Templars’ Last Secret,” published in June. This technique, by the way, works for reporters as well.

While mystery writers like Mr. Walker might seem far afield for a wine critic, many of the issues that consume Bruno in the books struck me as being parallel to questions the wine trade deals with daily: Can local traditions be cherished and protected in an increasingly globalized business? How can the demand for market efficiencies be balanced with their inevitable toll on aesthetic quality? What is connoisseurship?

Throughout history, wine — with a few exceptions like Bordeaux, Champagne and the fortified port, sherry and Madeira — was largely a local product, consumed by the community that grew the grapes and made the wine. The evolution of so many of these local wines into global commodities over the last 50 years has been an enduring story. So has the aesthetic conflict between wines that are still made artisanally, which can change and evolve in thrilling ways, and those that are factory products — cheaper, perhaps, but also as stable and consistent as any soft drink.

I hoped that spending some time with Mr. Walker, a longtime foreign correspondent for The Guardian who bought a house in the Périgord in 1998, would offer an opportunity to examine some of these issues in a fresh way — by looking at a region where the past holds powerful sway. No place has a longer recorded history, stretching back 17,000 years to the cave artists of Lascaux and 50,000 more to the Neanderthals.

Nor is any place more consumed with food. Henry IV called the Périgord the gastronomic heartland of France, and nobody who lives there would disagree. The fish, the game and the produce are all wonderful. On a late spring Sunday at the market in the town of St.-Cyprien you can choose from seven different types of strawberries and a fair number of the 246 cheeses that Charles De Gaulle famously said made France so difficult to govern.

Strangely, though, the local wine regions — Bergerac for dry reds and whites, Monbazillac and Saussignac for sweets — are little known and hardly esteemed. Sound historical, economic and political reasons, including competition with Bordeaux, its vastly more powerful neighbor, largely account for that. But in Mr. Walker’s books, Bruno’s circle of friends, who are as consumed with food and wine as he is, cherish their local production. Just as in Mr. Walker’s town, Le Bugue, Bruno’s local wine shop offers an astonishing collection of the world’s great wines, but most customers bring in demijohns, which they fill with local wine from tanks in the back of the store for about $2 a liter.

This is partly an issue of the natural frugality of country life. But it’s also an intuitive and noble understanding that to eat and drink locally is not just a bourgeois fashion. In the Périgord, it’s been a way of life for millenniums. “We like to hunt, we like mushrooms, we like a glass of wine,” François-Xavier de Saint-Exupéry, proprietor of the excellent Château de Tiregand in Pécharment, told me on a visit there with Mr. Walker.

As much as history and memory are integral to a community, so are they to wine. Only wine, among beverages, has the power to conjure a place and time distantly in the past. Good bottles tell stories as surely as authors and minstrels.

Spending a few days in the Périgord with Mr. Walker reinforced my own conviction of wine’s power to express culture. The pride that the people in the area take in their wine, and their innate ability to select from their local production a bottle appropriate for any occasion, is a far cry from an American wine culture built on ratings and grocery lists of aromas and flavors. You don’t learn these things just by putting your nose in a glass. But sometimes you can by reading a few good mysteries.