How To Explore The Black Périgord Of France

If you love maps and books and enjoy twiddling with a GPS, French geography will still challenge you. Administrative divisions, including 13 regions subdivided into 96 départements in mainland France (and Corsica), frequently change names and boundaries. 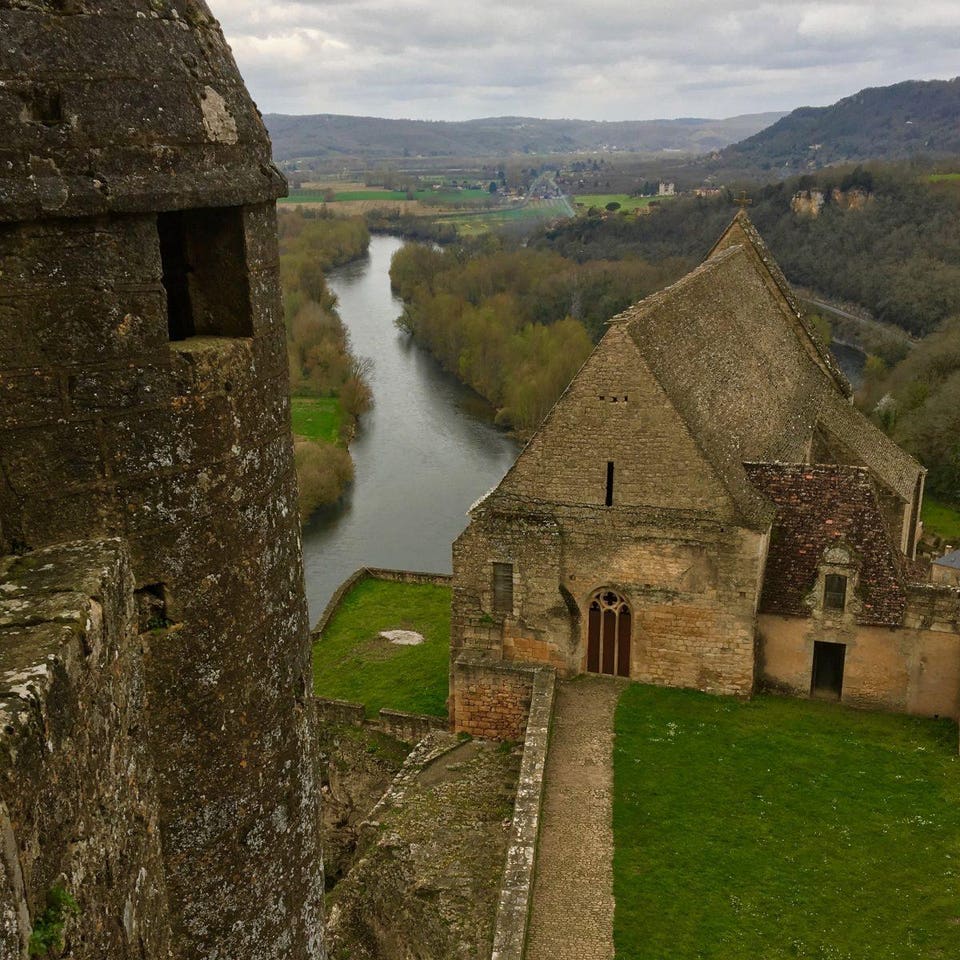 Take the example of Périgord. This patch of southwestern French territory was formerly a province, but then renamed as the département of Dordogne (after a major river). Even the French found this modification alienating. The result is that some government signposts, maps and books still refer to this region as Périgord, or Dordogne-Périgord.

Périgord is shaped like a splattered drop of balsamic vinegar—a fractal edged blob. This is further subdivided into four regions named after colors: black, white, green and purple.

The black region—Périgord Noir—is located in the region’s lower right and surrounds the confluence where two rivers—Vézére and Dordogne—merge like connecting scissor blades. The name originates from black soils, truffles and dark oak forests that once covered this cliff pocked land. This portion of Périgord is known for medieval castles and alluring gastronomy.

If approaching Périgord Noir from the south or west, parallel to the placid Dordogne River, park at any of several lots in the town of Beynac-et-Cazenac. Then hike up a series of steep and cobbled alleys—rattled by bird songs—passing orange stone homes with smoking chimneys. Church bells may chime and municipal workers could be weeding alleyways as you ascend. You will see crenellated watch towers at different elevations—historical vantage points for observing enemies or defending against attackers with crossbows, hurled boulders or shaken quicklime. At the top of this walk there is a village with restaurants and an adjacent castle worth exploring—Château Feodal de Beynac. Construction of this now privately owned fortress began in the 12thcentury.

The highest rampart here provides a magnificent view of a right-angled bend in the Dordogne River. From this point 450 feet above the water you can see much of the ‘Valley of the Five Castles’ and the rolling beauty of Périgord Noir.

During the Middle Ages this castle changed hands between French and English rulers. Richard the Lionheart fought to secure it and later, during a portion of the 100 Years War (which lasted 116 years, ending in 1453) the Dordogne River formed a border dividing French and English held territories. Across the river you will see Château Castelnaud—another intact castle that once housed English troops. 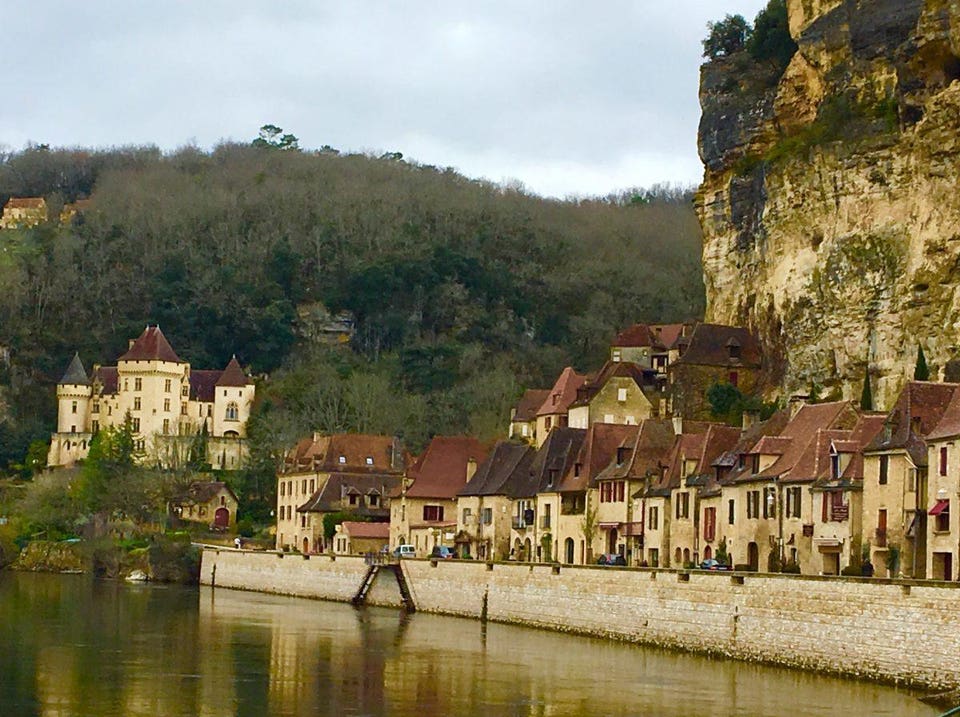 The village of La Roque-Gageac

After you descend, drive ten minutes up the road to La Roque-Gageac, a strip of stone structures wedged between limestone cliffs and the Dordogne River. A newly elevated waterfront walkway above glassy Dordogne waters provides an excellent view of this town, as well as an ancient cave dwelling, a ‘troglodyte village,’ above the buildings. The overhanging cliff above this south facing village protects it from winds and harsh weather and provides a somewhat Mediterranean climate. One result is that the aberrant growth of local vegetation can include palms, cacti, lemons and olives.

Before railway lines were laid, the Dordogne River was the main highway for transporting people and goods along the valley—hence the abundance of riverside castles and villages. Others chose to establish dwellings inland and uphill. This includes Domme, voted as one of the more beautiful villages of France and historically called the Acropolis of the Périgord. You can approach it from La Roque via mountain switchbacks that lead to a single lane arched entranceway. From 700 vertical feet above the river, Domme provides excellent views of the Dordogne valley.

Finally, take a 20-minute drive northward, to the city of Sarlat-la-Canéda. This urban heart of Périgord Noir is located on land between the rivers. Its growth evolved around a monastery and it now has more than 70 protected buildings and monuments. The inner Cité Médiévale is bisected—east to west—by Rue de la République. Only after you walk away from that unremarkable street do you enter the chaotic swirl of ramshackle, twisted alleyways—resembling a cross between the city of Brussels and villages from the Alsace, a sometimes rain soaked mesh of plazas and cobbled walkways beneath looming stone structures. This remnant city grew organically—like York or Mont Saint Michel—and so the layout lacks the straight lines of Euclidean geometry. Constant turns lead to surprises: a trio of brass geese, Renaissance and Gothic structures, a single room outlet where a brewer produces one barrel of bière artisanale each week in an ancient copper cauldron. 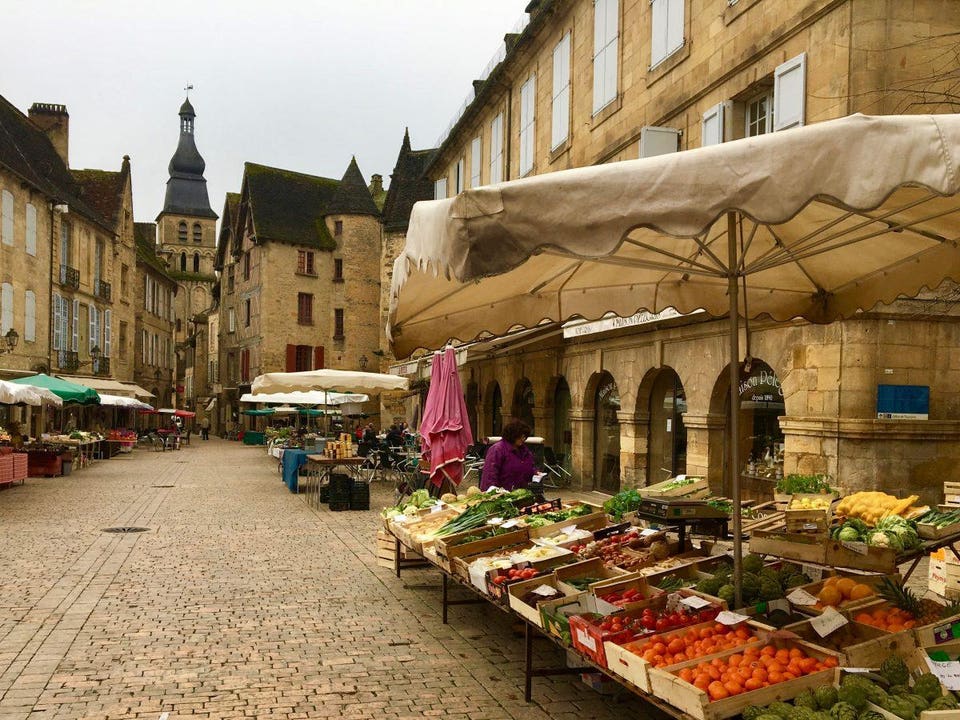 There is an open-air market here each Wednesday and Saturday. Stalls are set up between the Place de la Liberté and the Place de Peyrou, with impressive views of the towering Cathédrale Saint Sacerdos spire. In winter, brisk air blows up this alley filled with laughs and banter from vendors selling Périgord’s gastronomic riches. You can purchase locally renowned foie gras, duck and truffles as well as novelties such as huge walnut cakes, slabs of lavender hazelnut nougat, artichokes in season, and sunflower honey. Produce from other regions is also available—prunes from Agen, Toulouse figs and apricots from Roussillon.

After visiting the market, enjoy a lunch that may include salade Périgourdine—with lettuce, foie gras, and walnuts, followed by a duck confit and skewered shrimps in sesame oil (alternatively, consider sturgeon with chanterelle mushrooms). Follow this with a plate of local cheeses and fig chutney, then a dessert of caramelized pears with grated walnuts and chocolate. To drink—sample a hefty red such as a Malbec from the Cahors producer Château du Cedre.

Visiting Périgord Noir is a blast of historical immersion, compelling geography and rich food. Why are other Périgord regions named white, green and purple? Save that query for another trip.

Tom Mullen is a Forbes contributor and the author of The Winemakers' Cooking Companion.