How The French Dordogne Includes More Than Castles And Cuisine

The Dordogne département of southwest France is internationally renowned for more than medieval castles and foie gras cuisine.

It is also laden with a generous smattering of pre-historic sites that provide insight into the evolution of early humans.

The Dordogne (which is the name of a geographical region as well as a river) is sliced east to west, as well as northeast to southwest, by parallel river valleys—the Dronne, Auvézère, Vézère, Dordogne and Dropt. Many of these valleys are riddled with limestone cliffs and caves. This happy confluence of fresh water, natural shelter, decent temperature, fresh fish and woodlands for hunting wild food provided an ideal settling ground for pre-historic (pre-literate) humans. The earliest modern humans arrived in Europe about 40,000 years ago and these Cro-Magnon later settled in the Dordogne river valleys—the first traces of homo sapiens to arrive in this part of what is now France. The estimated date of their arrival is frequently revised based on fresh discoveries and analyses. 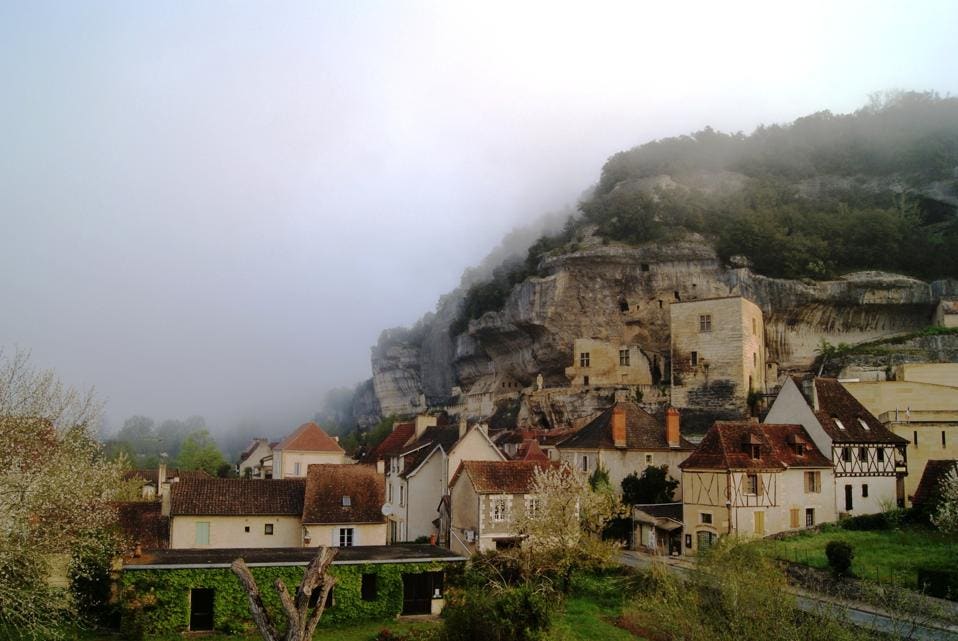 The Cro-Magnon legacy of carvings and paintings exists in dozens of rock shelters and caves. The mother lode of prehistoric art is the relatively recently opened $62 million Lascaux International Center for Cave Art, including a duplication of cave walls covered with paintings from perhaps 20,000 years ago. The real cave was closed in 1963 to protect these images from further deterioration, which had been exacerbated by excessive visits and poor management (including a somewhat crude installation of air conditioning). This modern site is set on 16-acres and includes mesmerizing replicas of paintings and engravings.

Beside Lascaux, there are multiple other pre-historic sites. A map in the Museum of Périgord Art and Archaeology in the city of Périgueux identifies clusters of prehistoric dwellings located within an approximate triangle bounded by the Dordogne cities of Nontron to the north, Sarlat to the east and Bergerac to the west (with Périgueux in the center).

The Vézère River valley is particularly rich with this heritage of ancient dwellings and cave art. Between Montignac and Les Eyzies-de-Tayac, where the waterway snakes, there are more than a dozen caves of interest—a reason why the valley was conferred UNESCO World Heritage statusalmost 40 years ago.

The French word abri means shelter. Along the Vézère River valley is Abri Blanchard (excavated in the early 1900's). In January, news emerged from New York University that art from here—showing ancient cattle—is likely 38,000 years old. Downstream is Abri de la Madeleine, a cliff with images carved by hunter gatherers some 20,000 years ago. It was here in 1864 that an engraving of a mammoth was found, revealing the first conclusive evidence that early humans once lived at the same time as this hefty mammal. Two river bends further downstream is the ancient habitat of Laugerie-Basse and soon after this is the Abri Cro-Magnon site, where prehistoric remains were discovered when a railway line was being laid in 1868. Today this site includes interactive exhibits and holographic projections portraying the time when first humans roamed this forested valley.

Les Eyzies-de-Tayac is almost as renowned as Lascaux, and includes the Musée National de Préhistoire—the National Prehistoric Museum, dedicated to almost half a million years of history. Open all year, the museum includes more than 10,000 artifacts such as ancient jewelry, sharpened cutting stones and ivory art. It also has a 120-seat auditorium. Visitors besotted by history can also choose to sleep in the appropriately named Cro-Magnon Hotel nearby. 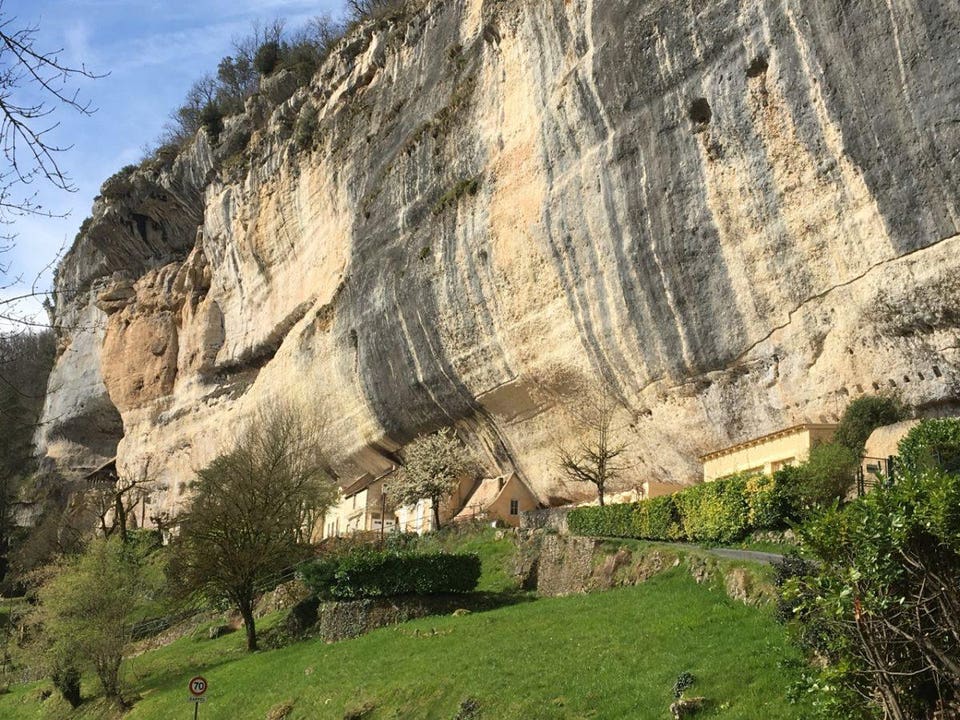 A mile away, the Grotte des Combarelles is a subterranean alley almost a thousand feet long and a yard wide that includes 600 engravings—of horses, reindeer, lions and mammoths. If you continue west and north toward the city of Périgueux, stop at the Grotte de Font-de-Gaume. This includes hundreds of paintings and engraved images from 15,000 years ago, including a few of stylized humans.

This abundance of pre-history will keep any visitor engaged for days, although there is more downstream (including Le Souci, La Gravette, and Les Jamblancs) as well as along parallel river valleys. During spring and summer opening hours are more generous, the temperature will be ambient and long daylight hours will provide plenty of time to explore. But there will also be plenty of other visitors driving to medieval castles and enjoying the famed Périgord cuisine. For a summer visit—plan your tentative route in advance.

Tom Mullen is a Forbes contributor and business consultant. Follow him on Twitteror Instagram or at the Vino Voices blog.