The Delicious World of Bruno, Chief of Police

LE BUGUE, France — As the police chief of the sleepy fictional town of St.-Denis in the Périgord region of southwestern France, Bruno Courrèges has battled murderers and arsonists, truffle fraud and archaeological vandalism, drug pushers and terrorists.

Yet, in 10 novels written by the British journalist Martin Walker, Bruno’s real enemies have not been the conventional wrongdoers so much as the high-minded bureaucrats who threaten a way of life that for centuries has made this corner of France one of the more pleasant, genial places on earth to call home. 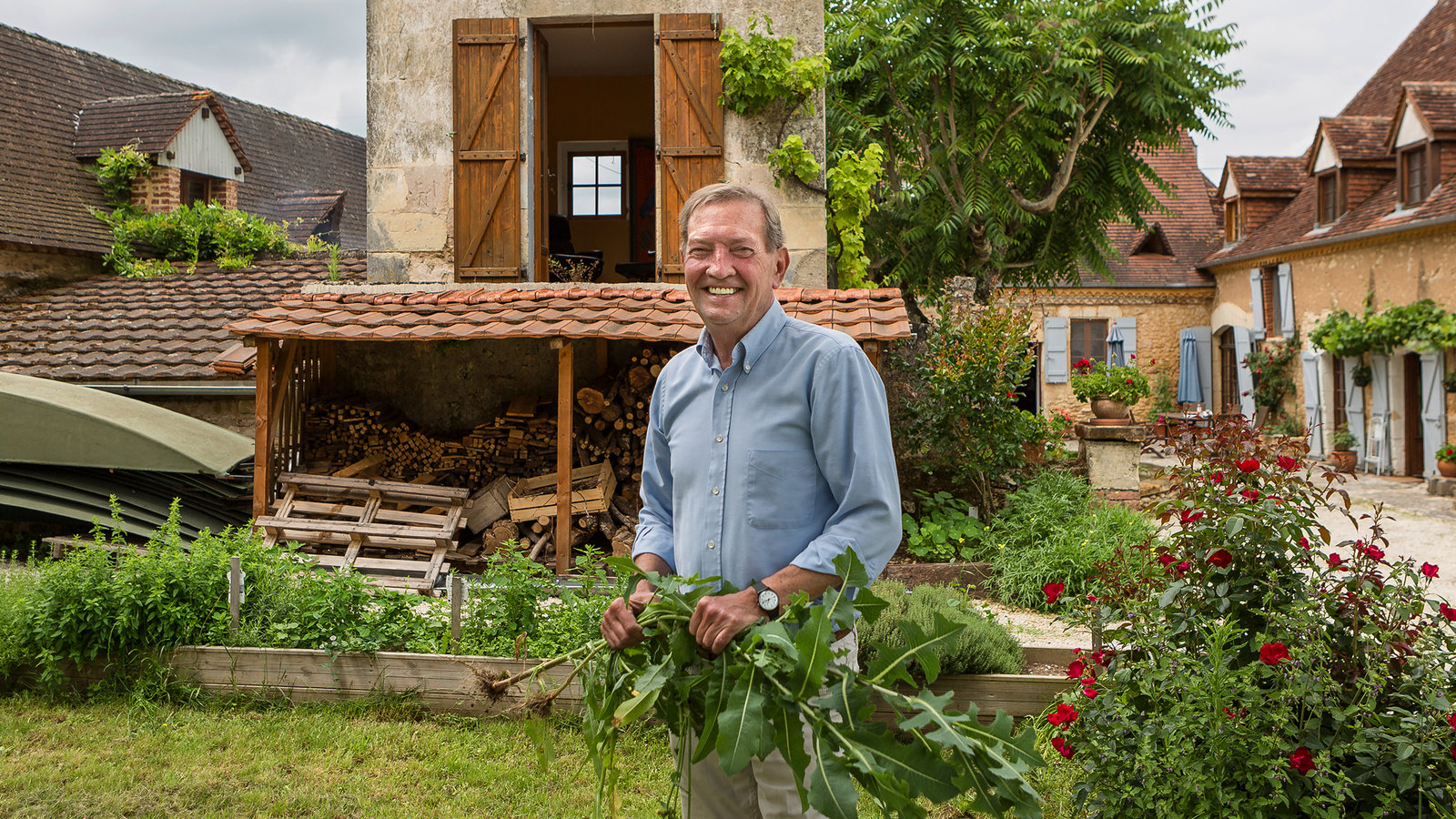 Not surprisingly, given the priorities here, where the St.-Denis tennis club is tricked out with a well-appointed kitchen “since no communal activity could take place without there being food and wine involved,” many of the battles between local tradition and globalization play out over issues of gastronomy.

Like Andrea Camilleri’s Montalbano novels, set in a Sicilian seaport, Mr. Walker’s books are rich in atmosphere and personality, with characters bound by the tenacious strictures of history and memory. And almost without fail, everything stops for lunch. It’s impossible to read a Bruno novel without getting hungry and thirsty.

Bruno grows vegetables and keeps chickens. He hunts black truffles and small birds. And he cooks well, rustic yet aristocratic fare like terrines, fish soups, veal stews and roasted chickens. A ham hangs in his kitchen, and while he loves a glass of good wine, he is mostly content with the local stuff sold out of a tank by Hubert, his local wine merchant. 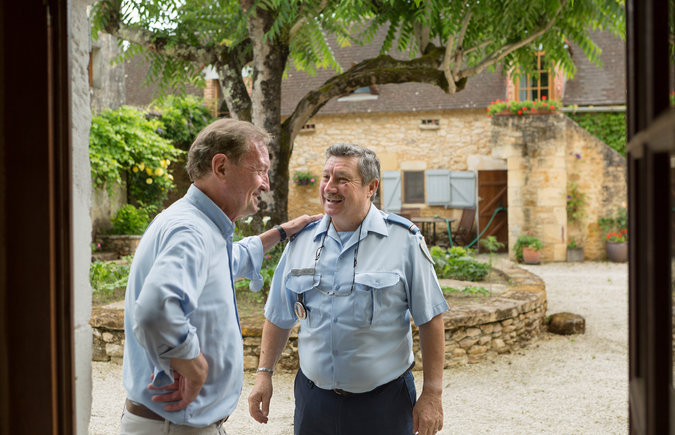 Mr. Walker with Pierrot Simonet, the police chief who was the model for Bruno. Credit Rebecca Marshall for The New York Times

The first book in his series, “Bruno, Chief of Police,” was published in 2007. The protagonist was modeled on Mr. Walker’s friend Pierrot Simonet, the local police chief who, like Bruno, hates carrying a gun, prefers talking to lawbreakers over arresting them, and teaches rugby and tennis to the village children. The most recent book, “The Templars’ Last Secret,” was published in June.

I have been especially intrigued by Bruno’s world because the Périgord, where duck fat is a way of life, is a backwater for wine, even if it is just an hour inland from Bordeaux.

The Périgord has been continually occupied for 70,000 years, since Neanderthals hunted in the forests and early modern humans created the masterpieces adorning the caves of Lascaux. Though the region has winemaking traditions that date back centuries, its Bergerac wines are little known in the world beyond. Even so, the fictional denizens of St.-Denis cherish their local wines and foods, which they consume without pretension but with an intuitive understanding that comes from long experience.

I paid a visit to Mr. Walker, 70, in late spring. When he is not in London or Washington, he lives with his wife, Julia Watson, in a small town, Le Bugue, which straddles the Vézère river and serves as a model for the fictional St.-Denis.

He spent almost three decades writing for The Guardian and served as bureau chief in Moscow and Washington. It was while living in Moscow in the mid-1980s that he and his wife discovered this corner of France.

“Dear friends had moved there, and we would visit every year,” he said. “Especially when we were in Moscow, to be able to eat the food of the Périgord was pretty good.” 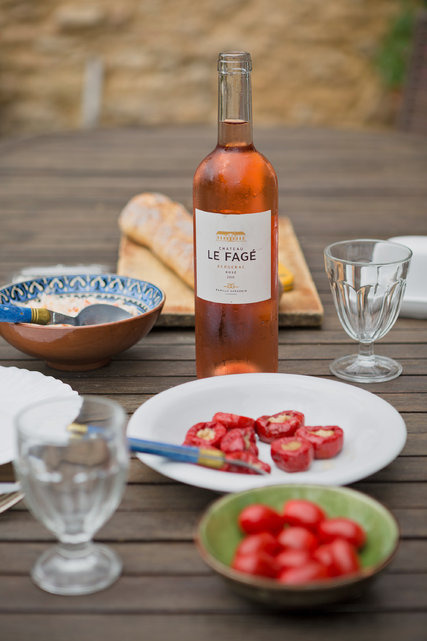 Though the region has winemaking traditions that date back centuries, Bergerac wines are little known beyond Périgord. Credit Rebecca Marshall for The New York Times

In 1998, they bought their own place, an old farmhouse, barn and pigeon tower on a quiet country lane, and quickly adapted to the rhythms and flavors of Périgordin life. Though it’s an area rich in the pleasures of the table, the region is among the poorest in the country by certain socio-economic standards.

“But it’s the highest quality of life,” Mr. Walker said over an evening aperitif, served with a rough country pâté and bread in his yard. “It’s the gastronomic heartland of France. The food just goes back and forth, and it’s a very nice way to live. Bartering fosters community.”

Getting into the spirit, Mr. Walker and Ms. Watson planted a potagerie, the garden of vegetables and herbs that is essential to French country life, and acquired a flock of hens, presided over by a rooster named Sarkozy.

As one would expect from a rooster, Sarkozy can be loud and blustery. Still his presence is a problem in other ways.

The couple cannot sell their eggs at the market in Le Bugue, which will celebrate its 700th anniversary in 2019, because European Union regulations prohibit a rooster from living with the egg-laying chickens. So they have entered the barter economy themselves.

“We’re all in the underground,” Ms. Watson said. “Not fighting the Nazis, just all the silly laws.” 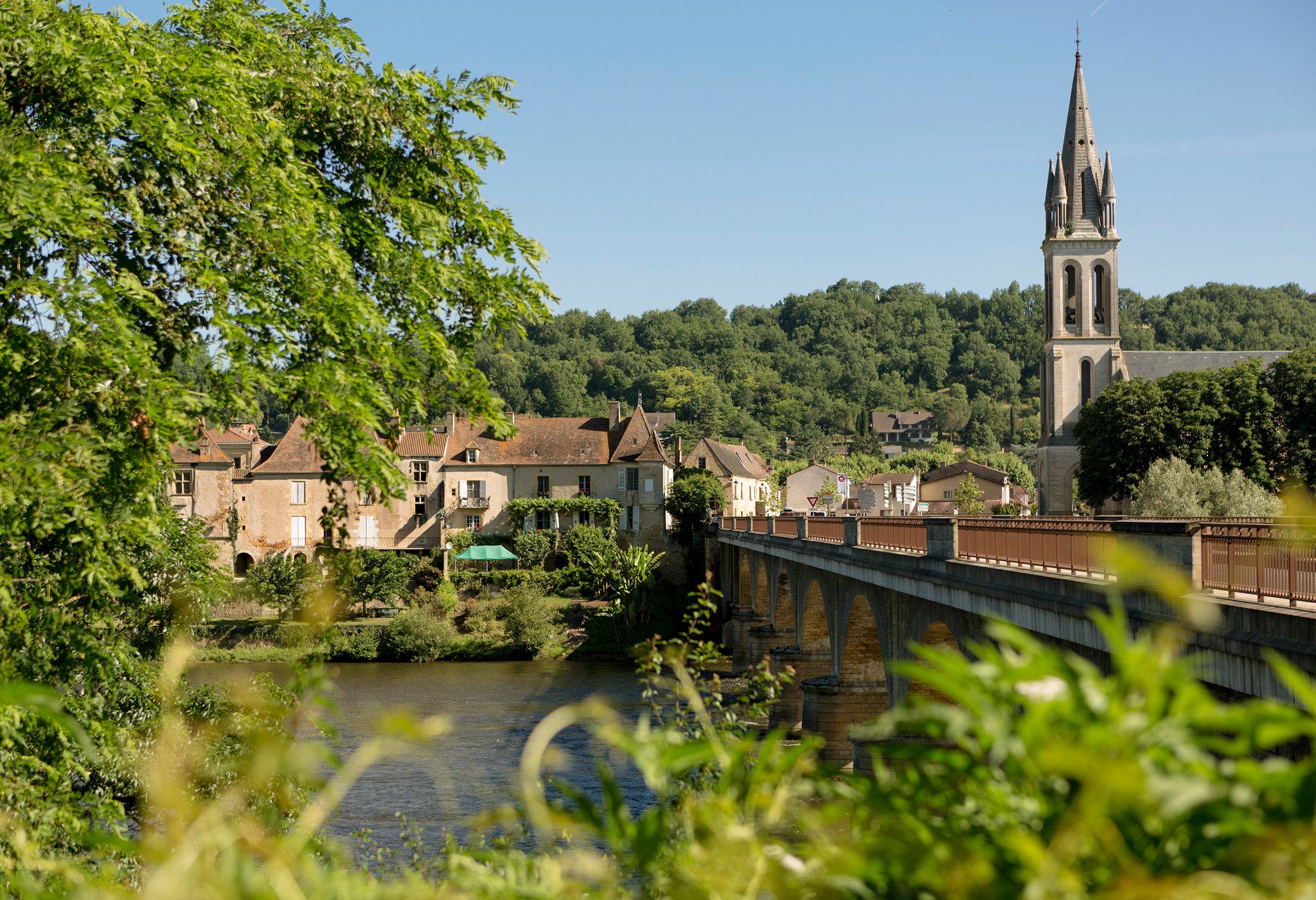 The European Union and its rules are a sore subject for residents of the region, who often see new regulations, no matter how well intentioned, as intrusions on a time-honored way of life. Here, the village of Lalinde. Credit Rebecca Marshall for The New York Times

The European Union and its rules are a sore subject for residents of the region, who often see new regulations, no matter how well intentioned, as intrusions on a time-honored way of life. Pig butchering, sausage making, cattle farming, cheese production and the traveling still, which circulated the countryside on the back of a bicycle, are among the traditions that have been altered by rules intended to safeguard the health and well-being of the citizens.

“When we bought our house 20 years ago, the main industry was farming,” Mr. Walker said. “Now it’s tourism.”

The British have always been drawn to this part of France, which they ruled until ejected from France at the conclusion of the Hundred Years’ War in the 15th century. The international success of the Bruno series has also contributed to Périgord’s allure as a tourist destination.

Mr. Walker and Ms. Watson had just welcomed a busload from Florida who wanted to see where Bruno had pulled a body from the river in “The Devil’s Cave,” the sawmill opposed by the Greens in “Black Diamond,” and the cafe where Bruno gets his croissants (every morning in every book). The books do especially well in Germany, and a constant procession of German Bruno fans passes through Le Bugue and the neighboring towns.

“The Périgord without Bruno is not the Périgord,” said Raymond Bounichou, a former intelligence officer and gendarme who lives down the road from Mr. Walker.

Tourism comes with a cultural cost. Three supermarkets, catering largely to tourists, now compete with the local marché, which appears Tuesdays and Saturdays. Le Bugue is served by five bakeries, each with its own following, though the tourists seem to prefer what Mr. Walker described as “horrible sandwiches in plastic triangles.” 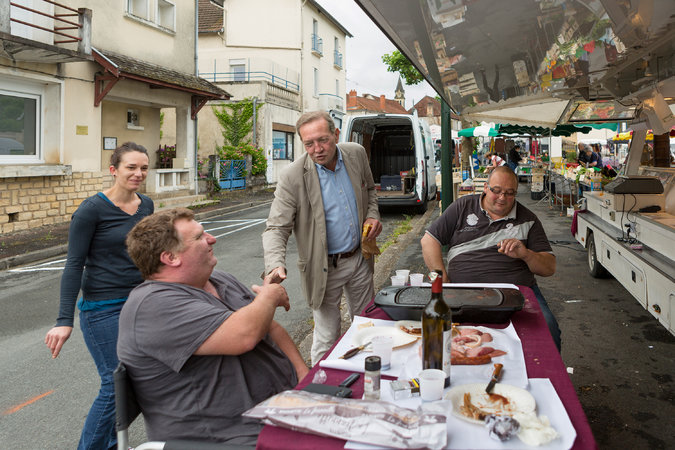 “Every time I see one my soul shrivels up,” he said.

As much as he is enamored of the food and wine, Mr. Walker is at heart a historian and storyteller who is drawn to the Périgord by its layered, copious history. Aside from its prehistoric residents, the region — dotted with castles, chateaus and fortifications — has been a center of conflict for centuries. The Moors came around the year 600 and stayed until 750. The Vikings arrived next. “Then came the real curse, the English,” Mr. Walker said.

The legacies of the French Revolution, of World War II, of Indochina and the Algerian conflict still run deep, and age-old conflicts are seared in local memory. Numerous plaques commemorate French citizens killed by the Nazis.

History also partly explains why the wines of Bergerac, made from a similar set of grapes as Bordeaux’s wines, are so little known compared with their coastal siblings. Aside from Bordeaux’s longtime advantage controlling the port and placing duties on Bergerac wines, Bergerac’s woes are partly self-inflicted.

Rather than replanting after phylloxera, the ravenous aphid that destroyed much of Europe’s grapevines in the late 19th century, the local government had a better idea, Mr. Walker said.

“Radical socialists in power pushed tobacco as the new wonder crop,” he said. “The black tobacco of Gauloises was grown around here.”

Nowadays, many of the growers in Bergerac sell their grapes to the local cooperatives, which make cheap wines sold in supermarkets. Mr. Walker makes it a practice to visit some of the better winemakers in the region, often accompanied by his friend Mr. Bounichou. 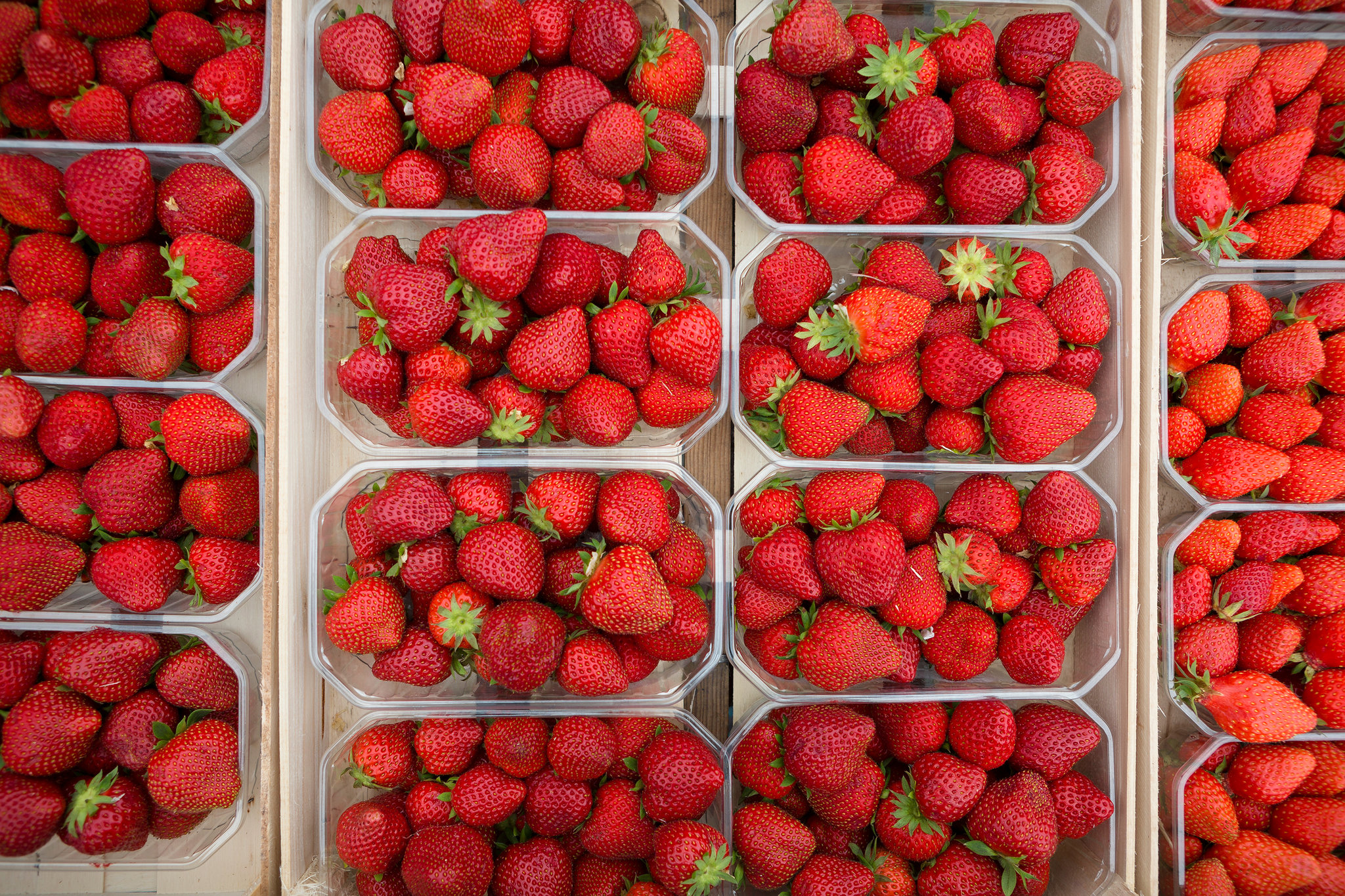 Strawberries at the weekly market in Le Buisson. Credit Rebecca Marshall for The New York Times

“It’s a deep pleasure knowing the guy who made the wine, to hear them talk about it,” Mr. Walker said. “The look of pride as they pour the wine, I adore that.”

Sadly, of these producers, only Tiregand is sold in the United States, and only in the Chicago area.

“The image of Bergerac is not great,” said Caro Feely, who has documented her family’s experiences running Château Feely in the books “Grape Expectations” and “Saving Our Skins.”

“We’re better off selling it as organic, biodynamic Vin de France than using the appellation.”

While tradition reigns supreme here, the region is not an insular, unwelcoming place. At a big Sunday market in the nearby town of St.-Cyprien, where Mr. Walker waved to the butcher and said hello to his friend Stèphane, a cheesemaker and neighbor who is also the basis for a character in the Bruno books, most of the vendors sold the local specialties. But Japanese temaki, pad Thai and goods from Burundi and Morocco could also be found.

Mr. Walker describes himself as “a welcome stranger” in the community, though his adaptation seems complete. He makes vin de noix, a local liqueur made from green walnuts. He takes part in a cassoulet competition that pits the Périgord against Toulouse: “We maintain it has to have a stuffed duck neck; they think it’s all about sausages.” And he relishes recounting a bit of farm wisdom for determining whether a calf can offer real milk-fed veal (which involves probing the rearward orifice).

In between planning meals and visiting vineyards, Mr. Walker, like Bruno, takes care of business, retreating to his office in the pigeon tower, where he does most of his writing — at least 1,000 words a day.